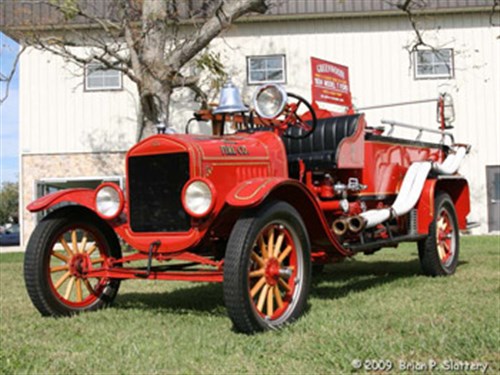 The Greenwood Volunteer Fire Company (GVFC) is extremely proud of the apparatus and equipment that has been acquired over the past ninety-five years. We have diligently worked hard to raise money to help maintain and effectively operate a first class fleet of emergency vehicles, and to provide our community with reliable equipment and extensively trained members.

GVFC members are frequently involved in fundraisers such as the Annual Fund Drive, Chicken BBQ, Roast Beef Trailer, and many other fundraising events. The proceeds received from these events often help to maintain equipment and upgrade the existing equipment to better serve our community.

The GVFC also takes great pride in teaching children in the community about fire safety and prevention. Our Fire Prevention program has expanded over the years and has become one of the best in the state.

1924
May 6 - Greenwood Volunteer Fire Company had 20 active members and 18 associate members.
July 14 - A decision was made by the Town Council to drive an experimental well for fire use.
August 15 - Held first Fireman's Carnival. The ferris wheel that was originally purchased for use in the Greenwood Carnival was sold to the Sharptown Volunteer Fire Company and is still in operation today at their annual Fireman's Carnival. Profits from the first annual Carnival were $1,621.75
October 17 - Purchased 12 complete rubber suits for the firemen, including the complete suit for the Chief. Boots $4.65; Coats $7.25; Hats $2.00; and two pair of rubber gloves to withstand 2300 volts of electricity.
November 7 - Purchased a fire siren at a cost of about $230.00. All emergency calls were routed to the firehouse and a resident that occupied an apartment over the firehouse manually activated the siren.
November 14 - Purchased a type "B" single electric siren with a 2 1/2 horse power motor.
December 15 - Adopted a motion to accept a 30 day option on the John A. Bradley property at a cost of $2,000.00.

1927
January 15, 1927 - Started serving annual dinners to the public to raise money. Members solicited townspeople prior to the dinner and collected donated goods, such as canned foods and chickens, to use for the dinners
1927 The Firemen participated in a baseball tournament opposing a boys team from the high school. A profit of $9.47 was made.
August 4 - Bill for digging out dirt under the shed for a concrete floor at the old Fire House: 1 1/2 hours shoveling dirt; 5 1/2 hours shoveling dirt; 3 hours leveling dirt. 20 hours total labor at 30 cents per hour. Total bill $6.00.

1928
The Firemen participated in a play named "That Path Across the Hill" along with community members.

1971
The suggestion was made to paint the soon to be purchased 1971 Great Eastern Pumper green. After careful consideration, the body of the Greenwood Volunteer Fire Company voted to have their new engine painted green. Of course, a fire company cannot run just one green apparatus, so the trucks already in possession were painted green as well, with the exception of the Model T.

1983
July 10 - Members participated in a Donkey Ball basketball game to raise money for the company.

1989
April 29 - Moved out of the "Old Firehouse" on Market Street and into the new station between the dual highway on Route 13.